Between forgiveness, reply similarly or advising, the responses of the citizens surveyed about their exposure to cursing with bad words varied. Although most of the answers were with the forgiveness, all opinions agreed that there is a widespread prevalence of profanity and offensive words among the youth in the Palestinian society. That’s what was discussed in the ninth episode of the “Non-violence is a Life Style” program was launched by Pal Think within “The Palestinian Consortium for Nonviolence” project, aiming to spread the culture of non –violence.

The episode addressed “The violent dimensions of media and daily discourse,” and hosted its first guest the writer, journalist and the director of the Palestinian Institute for Communication and Development Mr. Fathi Sabah, who talked about the reasons that made the spoken language in the Palestinian society a violent one. According to him, this is a natural reflection of all the manifestations of violence experienced by society everywhere. As he explained the violent practices of the Israeli occupation against the Palestinians, were the most important factor in promoting violence as a means of resolving conflicts and dealing with those who are different from us. This violence produced the so-called psychology “principle of uniting with the aggressor”, it means that when someone is subjected to violence for a period of time he/she will practice violence on the less powerful people, and this has become a reality today in society, and this increases the frequency of violence in it.

He also added that one of the factors of widespread violence in society is the existence of racism among its members besides the non-acceptance of the other or their views. As he explained, our using to some offensive names is an indication of this racism, such as the use of “Black –People Region” to denote the area inhabited by black people. Under this designation is an innate link between these people and the slavery movement practiced in Africa and America, this is a racist view of violence and even justifies and accepts violence unlawfully on a group of people as we have seen the increase in the killing of black-skinned people in the United States of America under President Obama who is black, all this is due to the lack of awareness both here in Palestine and there.

The episode hosted another guest, the head of the social media café and expert in social media platforms Mr. Sultan Naser. According to him what is happening in these platforms is not isolated from reality, however the violence practiced between people becomes a behavior on social media platforms, so you find those who want to interact with any issue such as solidarity with women and the fight against violence against them is expressed in a violent, offensive manner, and therefore it will gather similar comments and interactions that are offensive and violent. This stems from disrespect for the other opinion, stressing that violence and violent reactions increase as the sensitivity of the issue increases (such as the issue of the division with political dimensions and issues related to division), and this distracts attention to the fundamental issue that must be focused and resolved.

He also pointed out that violence on social media platforms turns the fun into discomfort and reasons for spreading intolerance. Regarding the global efforts to combat violence on social media platforms, he mentioned that there are complex algorithms, part of which analyzes the visual content automatically, obscuring the image or video that contains violent scenes and the browser have the choice if he wants to watch the content or not.

In light of the rapid development of the traditional and modern media, the content is spreading rapidly with all its contents and its underlying messages Mr. Sabah stressed. He pointed out that defamation has become very prevalent with the spread of social media, and we find this more clear in the absence of punishment, this is due to not applying of laws by the various authorities, although the crimes defamation contradicts three Palestinian laws (publishing, publications, cybercrime).

In a telephone participation, Ms. Laila Al-Modlal, the director of the Southern Media Forum talked about the dialogue and social tolerance initiative entitled “A dialogue without violence”, implemented in partnership with Pal-Think, mentioning that such initiative was a positive response to the high level of media crossfire between the Palestinian factions, leading to an increase in violence and tension in the dialogue among members of the society in general, and youth in particular, in addition to the lack of awareness of the national interest, which brings together all, thus increasing the concerns of youth and raise their suffering.

A dialogue without violence initiative targeted media faculties’ students as the neediest group to promote the culture of non-violence, and stop the media violence. . “The dominance of intolerance culture among youth requires relevant civil society institutions to adopt and launch initiatives that promote youth tolerance and non-violence”, Ms. Laila stressed.

Eventually, Mr. Sabah mentioned that the Palestinian Institute for Communication and Development is working on launching two initiatives in partnership with Pal- Think, to promote the values of constructive and calm dialogue. Since the absence of dialogue is what produced all what we are suffering in the internal Palestinian arena.

Sultan Nasser added that the accompanying of e-campaigns to any civil society initiative on non-violence should carry the concepts of civil society and intellectuals and disseminate them to the community through a wide social media platform and that will strengthen the principles and concepts related to the culture of non-violence and civil peace. 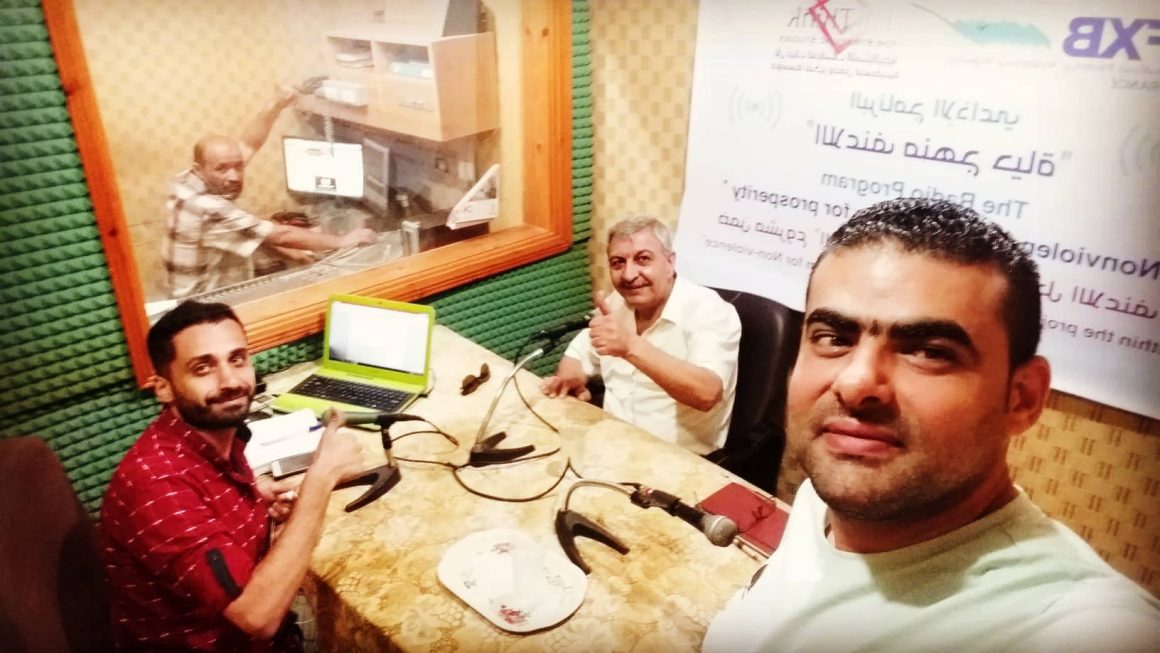 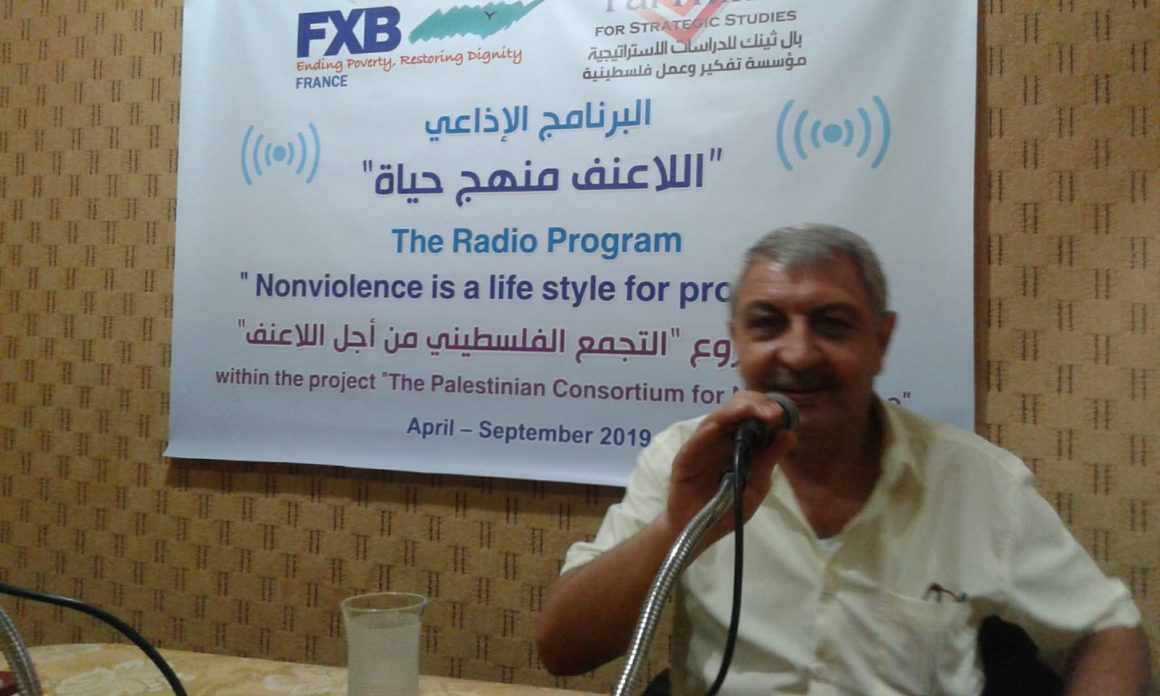 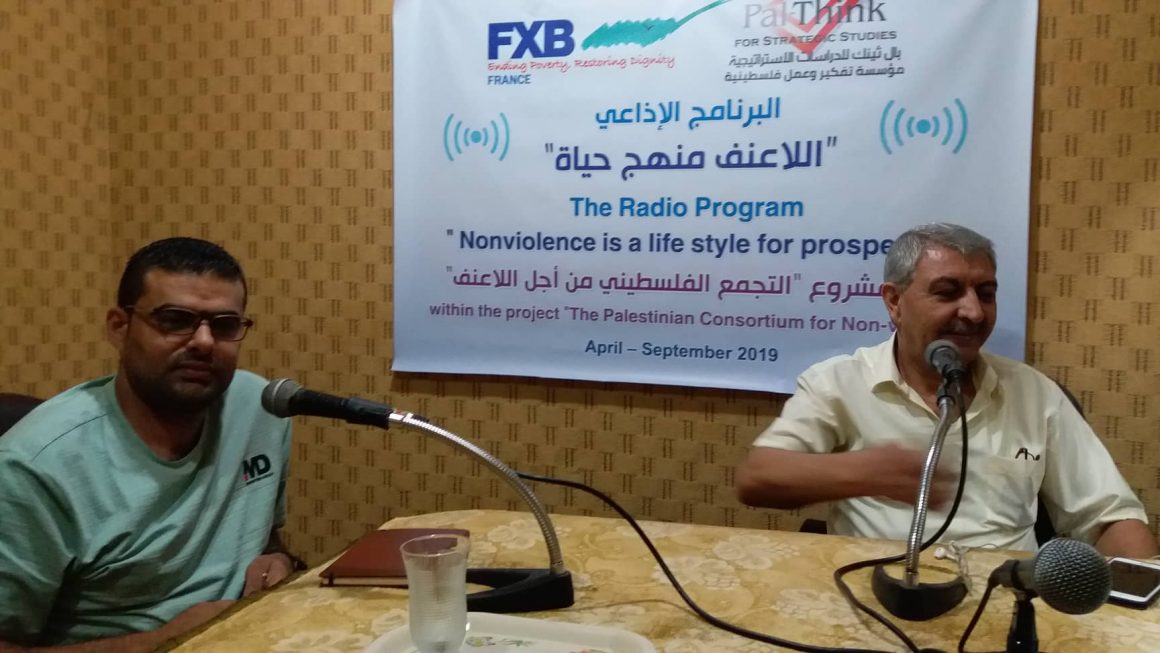