Al-Majd Center for community development concluded Children Against violence initiative in Jenin governorate. This initiative is implemented in partnership with Pal-Think for Strategic Studies and by FXB France, this initiative comes as a part of “The Palestinian Consortium for Non-violence: towards a regional movement on Non-violence” project.

The initiative focuses on violence concept and its dimensions, risks, forms and ideologies by carrying out nine training and educational meetings. Besides, discussions, brainstorming activities, videos and radio spots.

Through the activities, students interacted with stories, events, and concepts they discussed together and understood, However, violence breeds violence and leads to chaos and thus affects the fabric of our society and their dream of living in a peaceful society.

The initiative was involved with children, by taking the safety procedures, and presented its importance by the activities. It was noticeable how the children interacted with these activities after long days at home and lockdown. Plus, the school absence.

The initiative included a number of meetings, which were training lectures on violence, a concept, simplified content for children, stories and attitudes on violence. In addition, acting some plays aimed at defining violence, how to deal with violence and the role of mediator in dealing with violence.  Plus, a lecture on bullying, one of the most common forms of violence today.

The discussion and brainstorming started with participants about the dangers of bullying and the need for students to move away from this bad behaviour that disseminates violence and hatred and can even reach the point of committing a crime. A meeting was devoted to talking about cartoon violence, stories, and many events about this kind of violence, how children should avoid it because it has a significant negative impact on them. Besides, talking about the family role and the importance of safe use for the Internet.

A meeting was devoted to design and make games that reflect the state of violence and how to remedy it, where physical movements were introduced and their impact on the escalation of violence between students, children and society.

Moreover, short films on violence were also screened, and stories on children who faced violence were presented with awareness and recourse to the public authority meant by the mother, the older brother, the uncle, the aunt, the school’s guide or the principle. Additionally, video interviews with the children involved, in which the children summarized what they understood and learned during previous meetings on violence.

In the last meeting, an entertainment trip, competition and the distribution of prizes have been carried out. This atmosphere reinforced and contributed to establishing a very good understanding of peace and violence concepts. Since, there can be no safety, peace, entertainment and happiness with the presence of violence, so they have the desire and will to resist the violence against them or their society by their awareness and proper attitude of dialogue and tolerance away from wrong behaviour, verbal and physical violence.

Radio spots have also been recorded for some children talking about this initiative. Also, the themes and subjects they received during the initiative.

The participants in the initiative have many recommendations. Firstly, that children should be working with and delivering their voices as they need a secure, non-violent society to live. So, they can live, be creative, innovate, learn, and contribute to building the future.

Secondly, the need to continue the entertainment activities because of the bad psychological effects on children during Corona pandemic. Additionally, the current situation of economy and health.

Thirdly, the need for meeting the decision-makers and speak with them. Fourthly, strengthen the role of child protection networks and institutions with initiatives to take place in promoting a joint effort to renounce community violence and violence against children in particular. 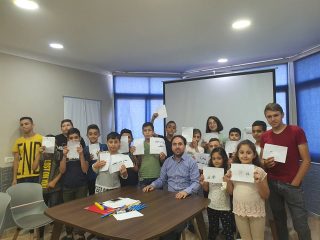 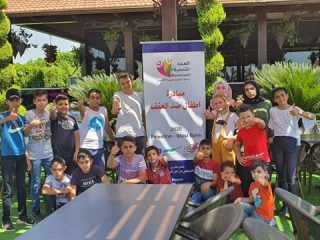