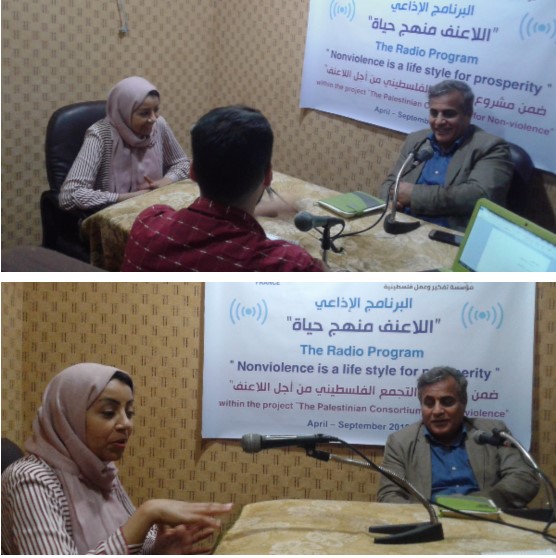 Within the project “The Palestinian Consortium for Non-violence” for Pal-Think and FXB international, Pal-Think for Strategic Studies completed the third episode of the radio program “Nonviolence is a lifestyle for prosperity,” which aims to promote the culture of nonviolence in the Palestinian society to resolve disputes and conflicts through peaceful and civilized means.

The third episode entitled “Nonviolence in facing discrimination” discussed the discrimination that exists at the different facets of the Palestinian society including health care, education, employment, gender, and some social practices such as marriage between people from different backgrounds, e.g. Bedouin from others living in urban areas.

Also, the episode focused on the economic, social, political, and other problems in the society that result from different types of discrimination as well as the use of peaceful means in facing such discrimination.

Dr. Bassam Saed noted that “discrimination” exists in different forms within the Palestinian society at homes, school, and institutions, this has played a negative role and contributed in weakening the social bonds among people. It is the case that when discrimination prevails, society suffers from violence, whether this violence against other people or even themselves.

Dr. Saed stressed that discrimination is manifested in several forms in everyday life, including discrimination between males and females within the same family, discrimination against women in a society where are deprived of making decisions of their own, e.g., marriage, work, completion of education, and travel.

Besides, discrimination between those who are categorized as refugees and others as citizens or amongst Bedouin, peasants, and citizens of urban areas. On the institutional level, discrimination is spread when it comes to employment; it is mostly based on a spoiled system of political affiliation. Consequently, all these forms of discrimination lead to a state of social instability.

Moreover, Dr. Saed pointed out that the feeling of belonging to a family, tribe or political party is not considered negative by itself, but rather everyone has the full right of belonging to any groups or communities. Finally, Dr. Saed stressed that to face discrimination, it is vital to promote the culture of dialogue, tolerance, and justice among people first, where everyone can have equal access to opportunities and resources.

Reem Radwan, director of the Arab Center “Activist”, said that the practices which result from discrimination call us to deal with discrimination which weakens the social contracts among people, especially that it is a type of exclusion that leaves profound psychological effects on those who experience it and leads to conflict within the community and break the social fabric.

Ms. Radwan expressed her concerns regarding the fact that discrimination became the basis for dealing with people and regulating their relationships and interests. First of all, we must to work to reject this stereotype of discrimination being the norm as the first step to confront discrimination e.g. it is common that political parties delude the public by applying a quota of women for seats in their party, but reality is they do not allow women to occupy real positions in that party.

Ms. Radwan noted that it is necessary to bind people to the laws to combat discrimination and pointed out to the  fear of  the emergence of sectarian and religious discrimination if we do not fight existing forms of discrimination, and the need to work on reforming societal aspects of life, to assess cultural heritage in order to reject discrimination in all types.

A poll during the episode was conducted, participants stressed that discrimination leads to hatred among individuals themselves and within society, that’s being said it is necessary that everyone fight all forms of discrimination and entrench tolerance in our community.

Last but not least, the two guests agreed that confronting discrimination should be through a long-term and sustained practice of justice and equality while advocating for consistent community accountability. Also, all the components of society and institutions must also unite in combating discrimination.