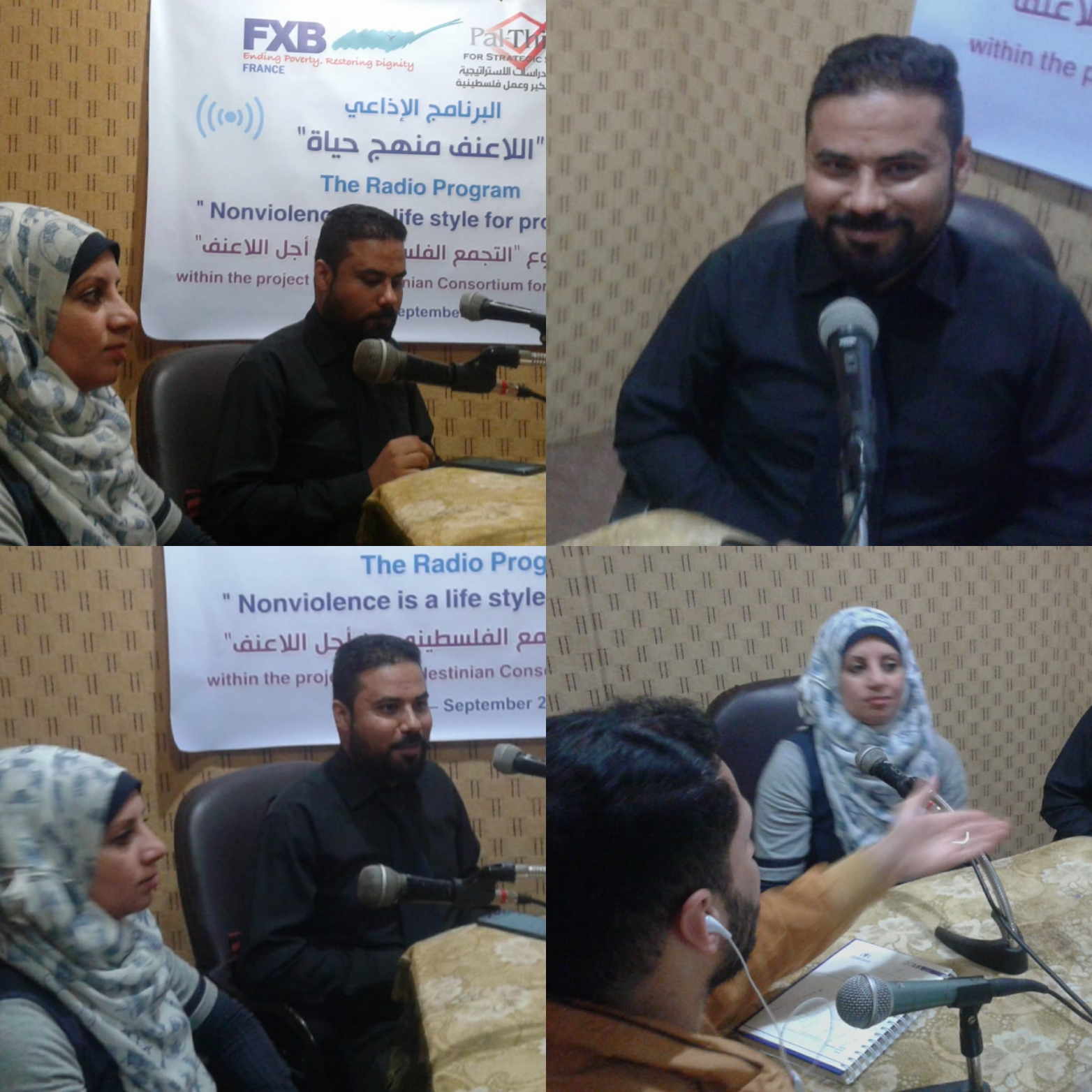 The second Radio Episode of the PCN Podcast: “Rehabilitate juveniles and promote non-violent concepts among them.”

Within the project “The Palestinian Consortium for Non-violence” for Pal-Think and FXB international, Pal-Think for Strategic Studies completed the second episode of the radio program “Nonviolence is a lifestyle for prosperity,” which aims to promote a culture of nonviolence in Palestinian society to resolve disputes and conflicts by peaceful and civilized means.

The episode entitled “Rehabilitate juveniles and promote non-violent concepts among them” discussed the issues of Palestinian juveniles, their problems, the obstacles they face in the rehabilitation process, and how they should be integrated into society after rehabilitation.

This episode’s guests are Mr. Abdullah Shrasha, a Lawyer and Legal Researcher. Also, Mr. Samar Qweider who is a psychologist.

Mr. Shrasha stressed that the General Administration for Reform and Rehabilitation has a primitive understanding in terms of education, which does not allow juveniles to complete their education and continue to lack awareness and skills that might help them to engage in the community after serving a sentence. Moreover, the law organizing prisons need to be activated to change the reality of the juveniles.

He added that the psychological and social burden and the general situation in the Gaza Strip have led to an increase in violence by the public, so there is a dire need to make reforms and to promote the concepts of nonviolence among the members of society first and then fight the crimes among juveniles.

Mr. Samar Qweider noted that the purpose of holding juveniles in the rehabilitation center is to surround them with a positive and reformed environment that facilitates active interaction and make them better human beings. It is essential for the rehabilitation program to be flexible and well-prepared to provide the appropriate care for everyone, taking into consideration differences between juveniles based on their situation and environment.

Also, the treatment of criminal tendency begins when juveniles understand the “why” of their presence in the rehabilitation center, efforts should be exerted to let them accept that treatment and not look at it as punishment. Rehabilitation is caring and improving not punishing. Also, juveniles should adopt the mindset that they are not criminals themselves; it is all just because of some unfortunate circumstances.

Rehabilitation is caring and improving not punishing.

Another thing is that the rehabilitation center should monitor the juveniles’ behaviors with their peers and evaluate the change happened and in which way they began applying the concepts of nonviolence in the daily situations. Also, making appraisals of juveniles’ behaviors after they get out of being released, and help them to learn market skills and different crafts, which will improve their economic situation after leaving the rehabilitation centers.

A poll during the episode with a sample of shop owners on: “Do the owners of shops in different areas of their work accept to recruit the juveniles after their period of rehabilitation …?” 70% of the respondents said that they would not accept them because they fear that these juveniles commit other crimes again and to avoid any problems that may result from recruiting juveniles, while 30% of the respondents agreed to give juveniles the opportunity to work, but it is important that they know details about the type of crime and they will also monitor them during work.

The guests agreed that the stereotypical image against juveniles should be challenged and changed for the better to ensure a more effective integration of the young-people in the society without resorting again to violent methods.

Last but not least, it is important to adopt alternative rehabilitation methods, where juveniles are introduced to community service and provided with educational and vocational training, engaged in voluntary and community work, which will support them and make an attitudinal change towards them in the society.