Concluding Marionette Puppets In Every House Initiative For Children

Pal-Think for Strategic Studies has concluded a series of “Non-violence is a life approach” radio programs that it implemented within the “” The Palestinian Consortium for Non-violence: towards a regional movement on Non-violence ” project, dedicated to international and national experiences in conflict resolution using the non-violent approach, and how to benefit from them in the current  Palestinian situation.

At first, the PhD holder in political studies, Dr Tala Abu Rokba said that all human societies were exposed to structural imbalances, which create internal disagreements and crises. Then he added that when societies are exposed to these disorders, they are the result of the system of principles and values to extract from them what guarantees protection and guarantees the promotion of civil peace and tolerance within them. He also noted that those principles and values can solve all problems, conflicts and negative phenomena that may arise from violence, crime and family disintegration.

Moreover, he said that Palestine is not separated from the world, so Palestinians have to take advantage of the experiences of other countries and communities, such as Belgian, Indian, Rwandan, Mongolian and South African experiences. Then he added, there are common points with the Palestinian situation that allow us to take these experiences as an example and a model for resolving internal disagreements and Palestinian divisions- Hammas Fatheh conflict-.

He stressed that Palestinian heritage is a  rich culture of tolerance and civil peace and values throughout history. For instance, Palestine is the land which brought together one of all religions, providing a unique model of civilized human coexistence throughout different stages of history.  Then he pointed out that despite the Palestinian territories have been marked by various occupations from the Romans, Greeks, Persians and Romans, but Palestinians have not been able to abolish the state of peaceful coexistence within the structure of Palestinian society.

He also stated that what has affected the Palestinian society lately is several external factors that succeeded in distorting and removing the non-violent inheritance from the image for the benefit of cultures gained through the practices of the Israeli occupation and by the Palestinian political performance and Hamas Fateh conflicts.

He also emphasized that it is a recent situation in the Palestinian society and it will not be an authentic one, but it cannot be eliminated except with a real will, and awareness that history has witnessed, especially when the Palestinians resorted during the British Mandate and the  Israeli occupation in 1967 of the Palestinian lands to resolve disputes through arbitration, mediation and peace.

After that, Bilal al al-Najjar, a lawyer, reviewed a paper on the Rwandan experience and how it could be used by a Palestinian, resuming the details of the situation that had resulted from the colonial influence on Rwandan society and working to separate it to the upper and lower classes. However, despite the fighting, which has claimed more than a million lives, the Rwandan people have managed to break out of the violence and have moved Rwanda to the economic competitive, development and social empowerment status of Nations by following steps that the Palestinians can take to break the Hamas Fatah conflict.

He also identified that  Rwandans tried to end their internal conflicts several times as what is happening now on the internal Palestinian level, but Rwandans succeeded only when they signed Arusha agreement that raised the slogan “No exclusion after today, and everyone should participate”.

He further stated,  Rwandans believed that the only way out of the crisis was to accept the other and bring all into power, and they followed the agreement with practical steps to eliminate all the consequences of the wars and genocide that took place, and to rebuild the country’s components through four steps, namely, establishing trials for all those involved in committing crimes and making fundamental reforms in the judiciary. Besides,  strengthening of Rwandan national unity and identity. Plus,  reparation to victims of the fighting.

As for the civil society institutions’ role in translating International and national experiences to Palestinian society, Ghassan Al-Sheikh, chairman of Al-Majd society for community development, said that it is a historical and not an abominable role that arose as a result of the gap between the ruling authority, the grass-roots and society.

He stressed that the gap started in a way that social and popular movements leading civil and community demands that focus on the importance dissemination of human rights’ culture and achieving the economic and social demands of the disadvantaged and marginalized groups, and these movements developed into civic institutions representing all segments of society.

He highlighted, that the work of civil society institutions inside Palestine is special because the most important demands of the Palestinian people are liberation from occupation and the nation-building.  Also, the different human and civil demands that relate to the living rights that accompany daily life. He also stressed, that institutions began and continued to their inalienable rights. He pointed out that what increases the privacy of work at the Palestinian level is the spread of Palestinians in more than one geographical location and the environmental and cultural diversity resulting from the Palestinian presence in the West Bank, Jerusalem, Gaza Strip and the diaspora camps deployed in neighboring countries, which is imposed on the institutions that provide their services to the Palestinians have to follow different strategies and plans of great diversity on the level of activities, but they all work to strengthen the Palestinian identity and to affirm the inalienable rights of this people. 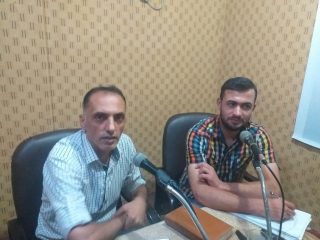 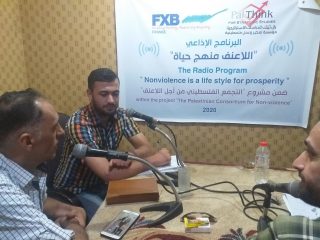