The Culture and Art to Promote Tolerance and Non-violence Initiative

Non-Violence As A Lifestyle Initiative

Digital Campaign to Curb the Spread of Gender-based Violence

The Culture and Art to Promote Tolerance and Non-violence Initiative

The Shagaf cultural initiative implemented ‘The Culture and Art to Promote Tolerance and Non-violence Initiative’, which was launched in partnership with Pal-Think for Strategic Studies and the FXB France, as part of a “The Palestinian Consortium for Non-violence: towards a regional movement on Non-violence” project that seeks to spread the philosophy and culture of non-violence as a life approach.

A selection of young intellectuals, poets, novelists, and musicians attending, the meeting was opened by the founder of Shagaf initiative, Mr. Yousri Al Ghoul, to welcome the audience, and said that many intellectuals today live in an ivory tower.  Despite the unity of our language and nation, we often dominate each other, so today we are talking about the role of art and culture in order to enhance the Palestinian human being.  In this respect, we thank Pal-think, which says we are with you and ready to contribute to the community’s advancement.

“We value all these initiatives that emerge from the young without waiting for any help from donors or officials,” said Omar Shaaban, director of the Pal-Think. Through several projects, they have interlinked institutions in the northern and southern Palestinian governorates to enhance cooperation among themselves to achieve community reconciliation.”

Moreover, he said: “This divide has frozen many of the Palestinian people’s achievements because no people can fulfil their societal and political needs while they are fragmented.  Yet we can avoid all the problems caused by the pressures imposed by non-violence, national unity, and promotion of peaceful dialogue. This is why Pal-Think aims to “foster a culture of non-violence,” he added. “We are diverse people, and dialogue brings peace and one finds another.”

We in Pal-Think continued to cooperate with local institutions because we believe that civil society should take its role and be in the forefront, especially youth groups like Shagaf.  I hope young people will believe in the culture of dialogue when dealing with the other.”

The initiative has five regular meetings, during which a global non-violence narrative will be discussed, as well as meetings to play music and activities that enhance the value of dialogue and tolerance among young participants.

In the same context, the director of the Center for Democracy and conflict resolution, Iyad Abu Hejer, said that “Art and Music are human languages that everyone understands. You can see Naji al-Ali, who summarized the Palestinian issue through 44,000 caricature. Besides, civilizations without values and concepts of justice and tolerance are doomed to collapse.”

Abu Hejir reviewed Rwanda and South Africa’s civil war horrors and then adopted them for justice, tolerance and community reconciliation.  As a result, Rwanda’s economic growth rate reached 9%, the highest in the world, and has become one of the continent’s most prestigious countries.

Then Participants’ discussed the possibility of justice, a culture of non-violence in Palestine, and difficulties in achieving community reconciliation.

The initiative is valuable because it targeted a topic for every Palestinian house, said novelist Basma Al Mashharawi, 23, a participant.  It is also good to have several partnerships among institutions in one initiative since this promotes the language of dialogue and makes us familiar with the others’ ideas and their way of thinking. Then she added: “In fact, those who care more about art and music are highly expected to understand and believe in the idea of dialogue”.

As for the young lady Manal Ubaid (25 years old), a participant, she said, “Art, in my view, is a kind of culture.  The more educated the person is, the more tolerant he will be.  We want to deliver our message in non-violence by writing, image and music.”

It is worth mention, Shagaf is a cultural youth gathering which, aims to create a cultural atmosphere between youths in Gaza strip. 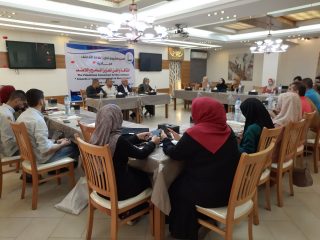 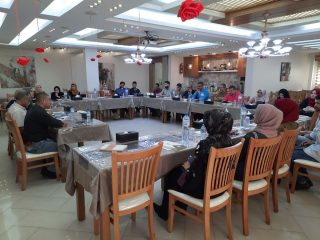 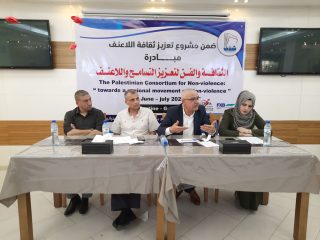 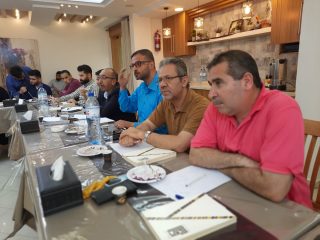 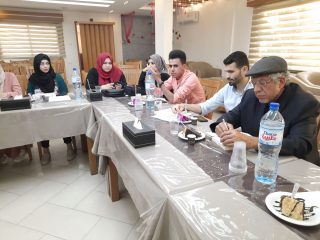