In cooperation with Pal Think for Strategic Studies and FXB, within the project ” The Benefits of Non-Violence as a Culture and Instrument for Conflict Resolution Domestically & Regionally” , Al – Marsa Center for Culture and Media has implemented an initiative entitled ” Happy child away from oral violence “, where a silent play was carried out. This play aimed to address the concept of verbal violence and problems resulting from this kind of violence, and its impact on children in their daily behavior.

The initiative targeted the children and their parents that verbal abuse faces children is usually began at home, so it was very necessary to spread awareness to fight such abuse, starting by parents extends to the rest of society. The theatrical shows aimed to clarify the impact of the good and encouraging words on children and their behavior, against the negative impact of the words of anger and abuse that hurt the feelings of the child, and cause psychological defeat and frustration,  also giving children ideas and skills of how to deal with verbal abuse, and work to reduce the spread of verbal violence among children themselves by showing the positive aspects of communication and dialogue in peaceful and civilized ways.

Participants reacted actively with these shows, and by opening discussion, they confirmed that good words protect human dignity, and disseminate the values of tolerance, community peace, and cooperation, while bad word is a timely bomb that destroys societies with its violence and cruelty, also they calls civil society to work together to spread awareness of the culture of nonviolence and its peaceful means that build communities and individuals. 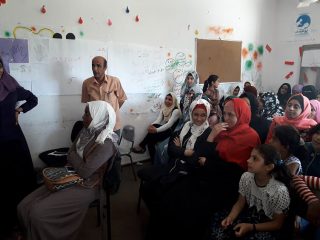