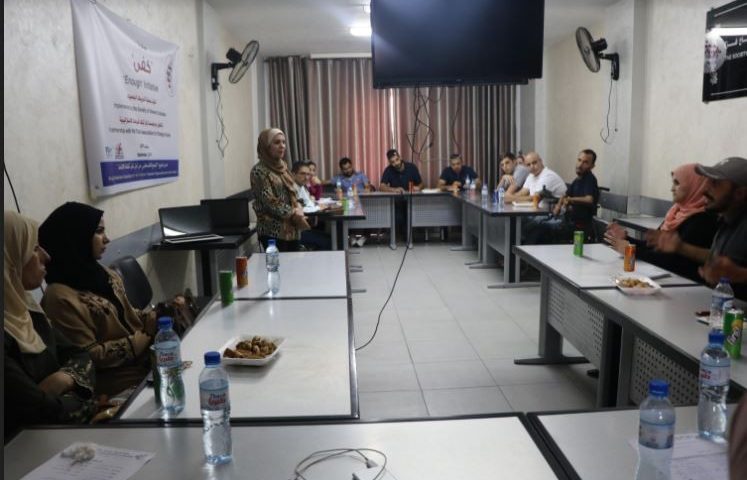 Association of Female University Graduates in the Gaza Strip in cooperation with PalThink for Strategic Studies and FXB France,  concluded its initiative entitled “Enough” by screening two films featuring the outputs of the initiative which shed spotlight on non-violence. To mention, a good number of youths who had experience in film-making and who had personal experiences in social violence attended this closing event.

Wala’a Al-Hayek, coordinator of the initiative, opened the closing event, emphasized the significance of freeing our communities of violence and asserted setting non-violent techniques to confront violence.

“We strongly have to eliminate family and social violence in order to live a happy life” Wala’a added.

General Manager of the Association, Wedad Suorani, commended the partnership with Pal-Think for Strategic Studies, referring that this initiative was a part of “Benefits of Non-Violence Culture” initiative aiming at spreading the culture of non-violence in the Palestinian society contributing in reducing internal conflicts.

As a matter of fact, the event entailed demonstrating two experiences from the participants of the initiative. The first discussed a story of a girl who aspired to work as an actress, but was prevented by her father. Actually, she was capable of overcoming this obstacle by convincing her father of her talent. As time passed, she invited her father to watch her on stage where he was incredibly surprised by his daughter’s performance and the colossal audience attending.

Following the event, Ghada Mousa had the second experience with her family whom they prevented her of going out due to her disability. Tried so hard to discuss this with her family, she eventually gained her freedom out of the walls of the house.

At the end of the event, the participants expressed their need for continued effort to be exerted by the civil society in order to get rid of all forms of violence and of restrictions on individuals.